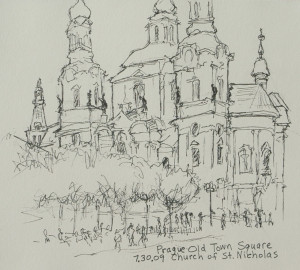 We continued our travels and took a train 2 1/2 hours from Dresden to Prague. The scenery was beautiful, the tracks followed a river all the way to Prague. We arrived in the train station, got some Czech money, and found the tram that would take us to our hotel.

After settling into our hotel, which was lovely, we headed for the center of the City. We had a week long pass for the trams and that proved to be our main mode of transportation. Our hotel was a 10 minute tram ride from the center of Prague.

Probably the busiest part of Prague is the giant Old Town Square. It’s bordered by the Town Hall, two beautiful churches, and ringed with cafes topped with umbrellas. We passed through this square once a day for the 6 days we were in Prague. From the crowds I think everyone else in Prague did too!

My sketch of the Church of St. Nicholas in the Square is another of my favorites. We sat down for dessert one evening and chose the restaurant strictly on which one had the best view of this church. And I put some people in this sketch for the first time – that was my son’s suggestion. They’re more like squiggly lines, but there isn’t much time when sketching. Plus they move! I like the addition of people, it gives this sketch some life.

A couple of days later I sketched the same church again. We signed up for a tour to Terazin, a concentration camp an hour from Prague. The tour bus (large van) picked us up at our hotel and delivered us to the Square where we would meet up with the rest of the tour. We got to the Square with 30 minutes to spare. Enough time to sketch! This time though, we weren’t at a cafe so I ended up leaning against a wall to sketch. That’s me below.

Sketching on the bus proved difficult because I draw at human speed and pretty villages with church steeples were whizzing by way too fast. I did attempt a couple of sketches and here are the best ones. 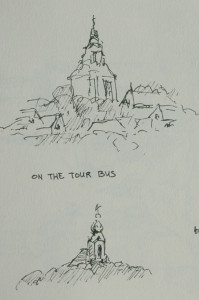 It didn’t take me long to spot a collection of little stuffed animals the bus driver had stuck to the inside of the van above his head. Very unusual . . . . but I was happy to see my next subject. I chose two of the stuffed animals to sketch. It was fun, good practice and they didn’t move once! 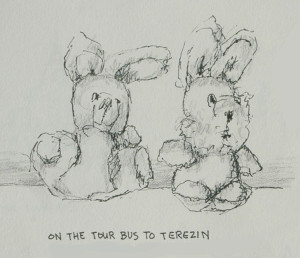 Touring the concentration camp added another layer to our understanding of the Holocaust. This particular camp’s primary purpose was to serve as a holding area for Jews before they were transported to Auschwitz, further east. We watched a film about the camp in the movie theater that had been built for the Nazi officers and their families, who lived within the walls of the camp. We had a beautiful sunny day and touring the empty buildings made it a little difficult to really imagine all the horror that occurred in that place. The Terezin camp was originally built as a fortress against the Prussians in the 18th Century, which added more history to the site and took some of the focus off the Holocaust. I’m glad we went.

More sightseeing and sketches to come!