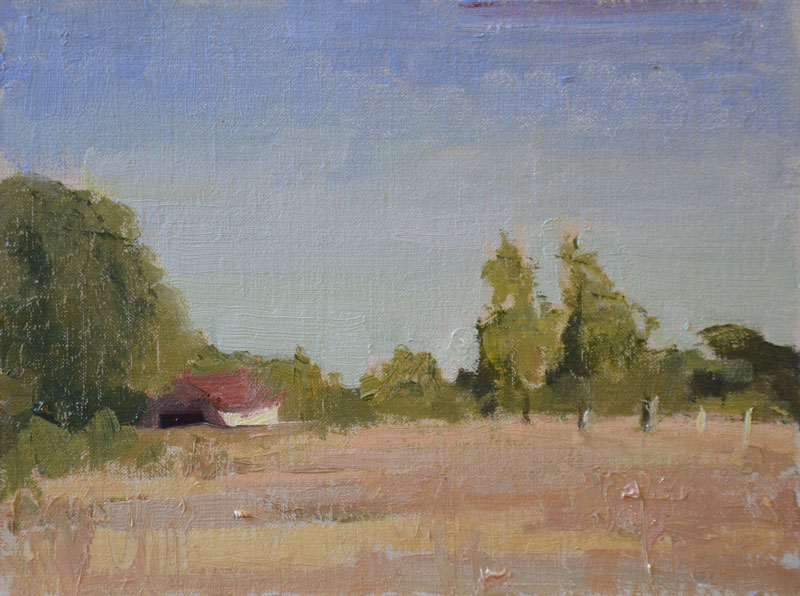 My painting buddy Myrrh Haslam and I decided to plan a two day painting trip: we would drive an hour and a half west of Houston and paint the fields and barns near Round Top, Texas for two days.  We met at our usual parking lot at 7:00 a.m. Monday morning and drove west.  An hour later we got off the road and circled back to get a better view of a barn we had seen from the highway but on the way to THAT barn we saw this scene and pulled over.  You always have to keep your eyes open!  I loved the greenish sky this early in the morning.  We never did find that other barn. 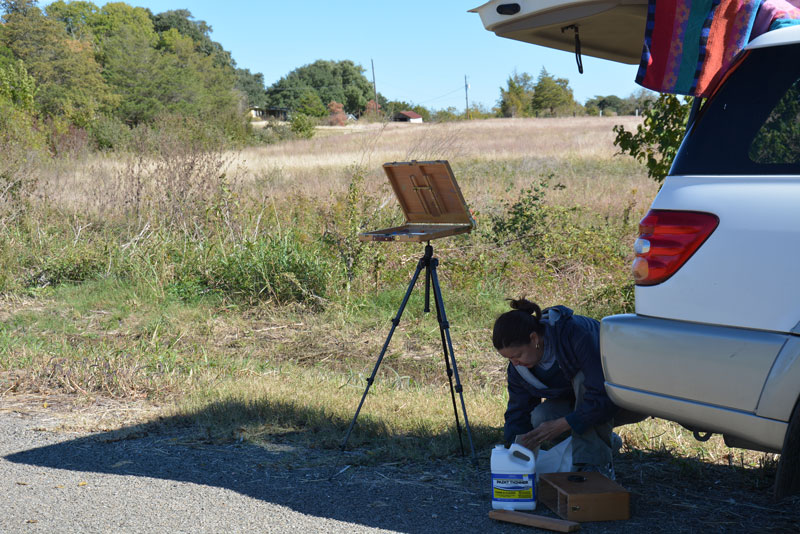 Wiping off a canvas.

This is me wiping off the 8″x10″ canvas that I started.  Guess it was too early in the morning because it wasn’t working.  I put aside the 8″x10″ canvas and grabbed a 6″x8″ canvas which is the one I finished above.  After spending a few minutes on that 8″x10″ I realized it was just too big for the combination of this scene and the early hour.

We drove on towards Round Top, our favorite tiny town an hour and a half west of Texas.  A few thin clouds were moving in and the wind was picking up.  We saw a beautiful expanse of pastures and a pond so we circled that area until we found a place to park.  We even found a little shelter in the form of some bushes as a wind break.  This painting is definitely a study and not as finished as I usually paint.  I was trying to capture the colors and it actually turned out to be a pretty complicated scene to paint in a short time.  Those lumps in the field are haybales, I feel I may need to clarify, there will be a quiz later.  Not kidding.

After two paintings it was time for lunch.  We drove 10 minutes into Round Top, thinking the Mexican restaurant where we had lunch last week would be open if nothing else was.  Sure enough, nothing else was open for lunch so we headed to the Mexican restaurant.  Well, we didn’t have to “head” there, the town is so small  you can stand in the middle of it and see every restaurant in town.  So, we turned our heads and looked over at the Mexican restaurant and then saw the “Closed” sign hanging on the door.  Hmm.  We decided we could at least find something in the general store so we drove the 2 minutes to the general store.  The lady at the counter, whom we’re getting to know, said there was nothing open in Round Top but JW’s was open over in Carmine.  Great!  A restaurant and it was open!  Carmine was less than 10 minutes away so we took off in that direction. 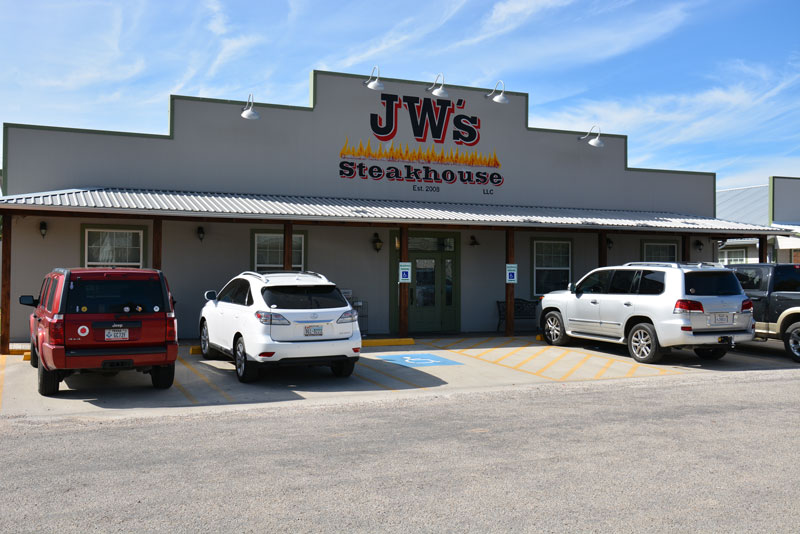 We didn’t even ask directions, Carmine is so small I knew we would find the one open restaurant in the town.  And here it is, a big steakhouse that happens to be right on Hwy 290 which explains why it was open.  We went in and the restaurant area was full but the area in back, the bar, had tables.  Lots of shiny wood tables and a football game on the tv over the shiny wood bar.  Perfect.  The tables in this part of JW’s were all occupied by men, but there was an open table so we sat down.  Myrrh said “It smells good in here”.  Then “It smells like men’s cologne and pie!”  So funny!

After our pleasant but late lunch we drove around looking for our third location.  We were determined to paint 4 studies and it was already almost 3:00 p.m.  We were looking for scenes with something strong about them, a strong shadow pattern for instance.  Something dramatic.  So we needed the right combination of a good composition with the shadows in the right places, and we did not want to be looking into the sun, and we needed a good place to park the car.  We are very respectful of private property, but on the other hand we don’t like being on the side of a highway. 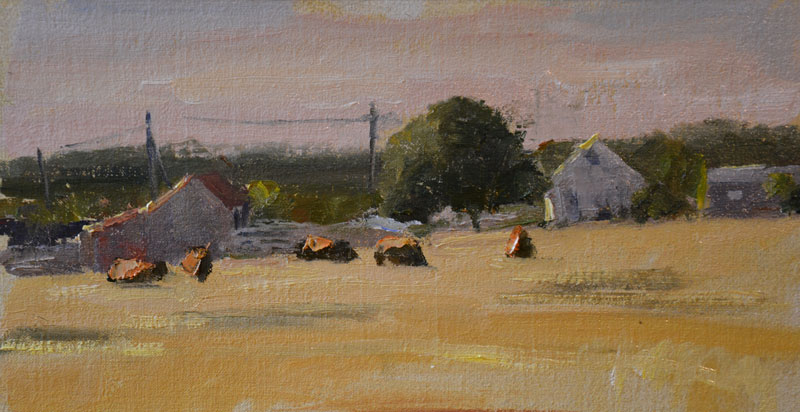 Then we found something.  Some days the scenes come easier, some days they are harder to find.  And I know they’re out there and it’s just me that can’t see the scenes on some days.  But this one jumped out at us.  Again it was a horizontal scene.  For some reason I’m seeing all my scenes as horizontal scenes especially with no clouds to fill up the sky.

We stayed at this location until the sun was almost gone.  I loved the pretty pink sky and the fading sun illuminating just the edges of the buildings and cows.  Yes those are COWS.  My husband thought they were rocks.  In the middle of the field.  When I told him they weren’t rocks, he guessed hay bales.  So I named the paining “Afternoon grazing” cause rocks and hay bales don’t graze. 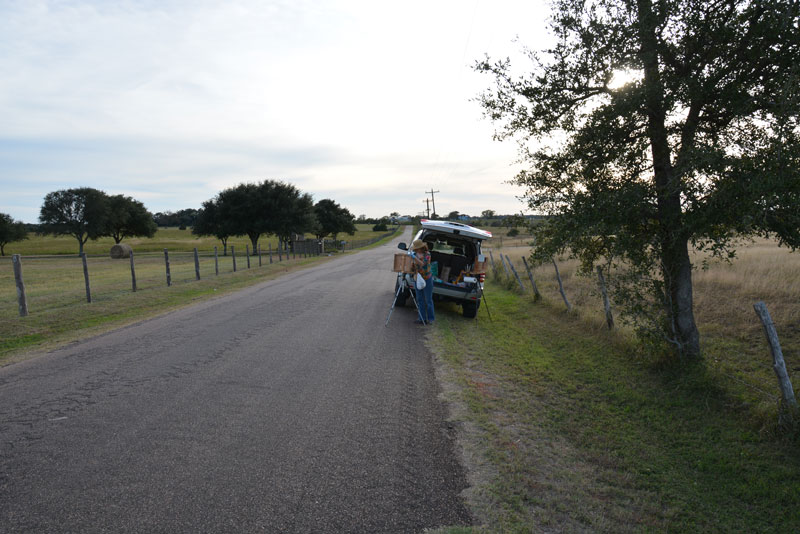 Painting in the last light of the day.

Such a pretty secluded road.  Here you can see both of our easels set up at the back of my car. 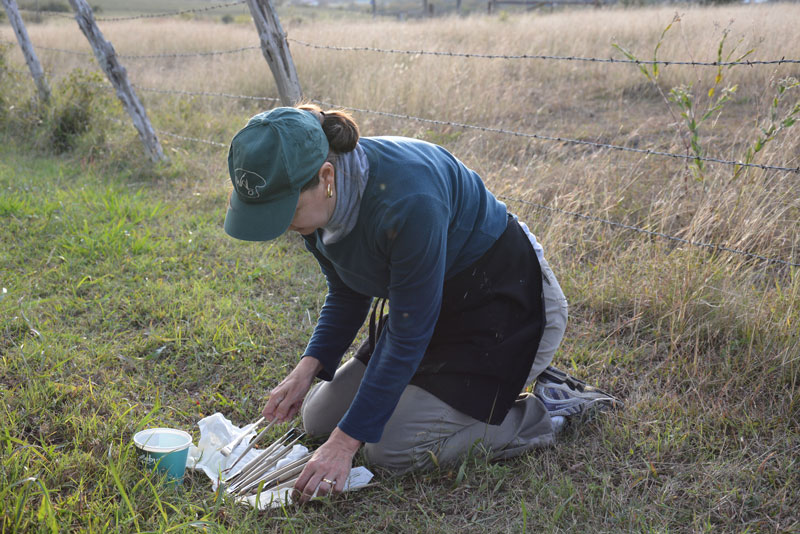 Cleaning my brushes at the end of the day.

After I finished my little painting I took a few minutes to clean my brushes.  Better here than the parking lot at a hotel.  This is probably the least glamorous part of being an artist in my opinion, not that being an artist is exactly glamorous.  Either way, cleaning my brushes is an end of the day ritual that I sort of enjoy. 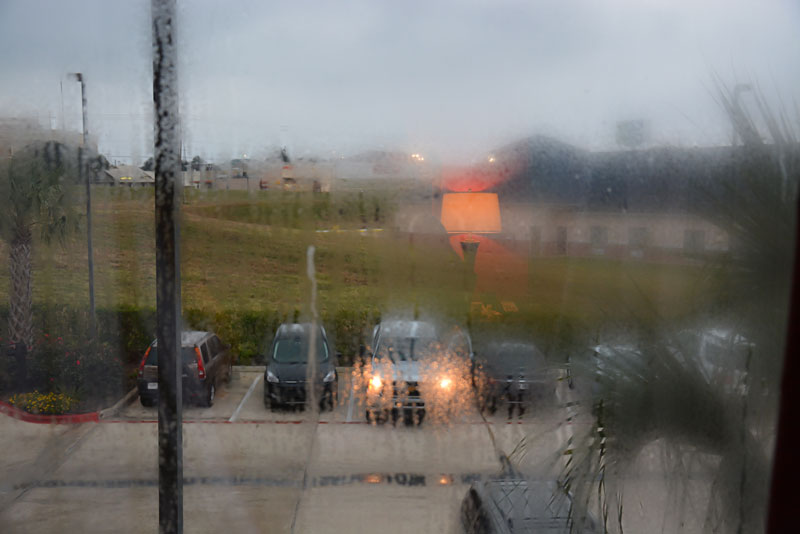 Morning view out of my hotel room window.

We spent the night in Brenham, 20 minutes from where we were.  Brenham is a small town with chain hotels, my room had a lumpy pillow and a lumpy comforter with a little sign stuck on the headboard that said “We wash the sheets and comforter after every guest”.  Hm, and this is a selling point?  We found the best hotel in Brenham and this is what we got.  How I suffer for my art.

What you see above is my view out of the window in my room at 6:45 a.m. the next day.  Not exactly promising for a day of plein air painting.  Myrrh and I met downstairs for breakfast (don’t get me started) and then we drove back to the Round Top area.  It was 46 degrees with a stiff wind, but as Myrrh pointed out “at least it’s not raining”.  Myrrh is such an optimist, and so early in the morning. 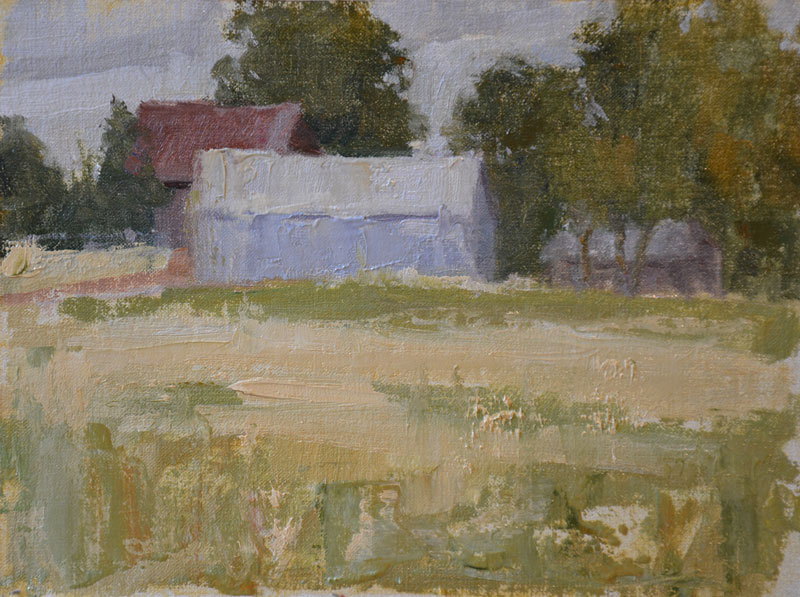 We did find a beautiful scene to paint, with a good spot to park the car.  It really was beautiful even though it was uncomfortably cold outside after 30 minutes.  The sky was grey and the fields were such beautiful greens and wheat colors. 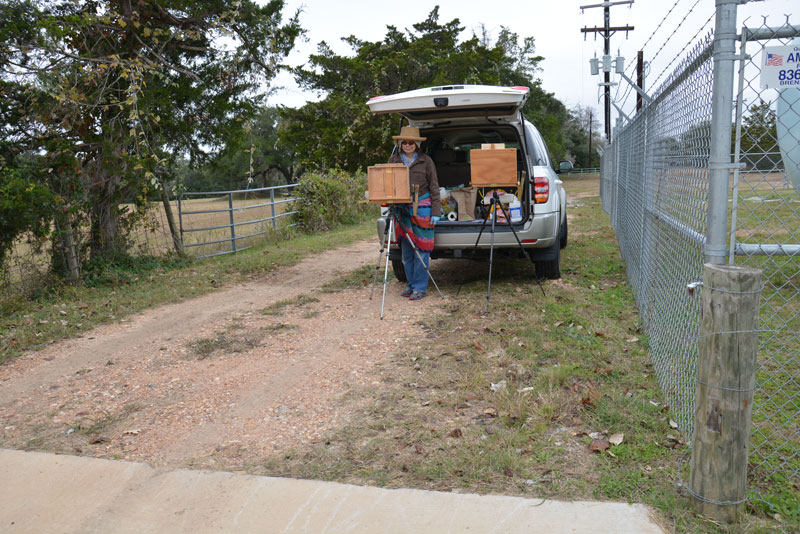 Painting in the cold and the wind.

After an hour of painting my fingers were getting a bit numb and the paint on my palette was thickening.  It was time to pack up.  We drove to the general store in Round Top and had some delicious hot chocolate.  We spent the next few hours taking the very scenic route back to Houston, all the while hoping to find something worth standing in the cold wind to paint.  I think if it had been a sunny day then we would have braved the cold and the wind, but on a dreary day we gave in to the warmth of the car and made our way back to Houston.

So here is the quiz, which are the cows and which are the haybales?  I need to practice drawing/painting cows, so squint and use your imagination.  Hint: there are no rocks!

If you would like my blog in your mailbox please SUBSCRIBE to my blog.  FYI I don’t usually have quizzes.