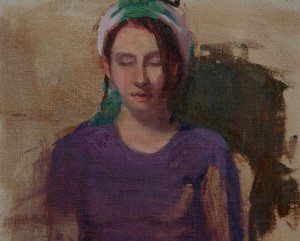 Finally I have something to post! This is a painting that is in progress of a young model. I did paint a couple of times last week but I don’t like the results well enough to post. I attempted a model and her baby (not my idea) and I will spare you that painting. Note to self: babies are cute but do not make good models! They don’t sit still and don’t take direction at all.

This weekend I am going to teach my first class. My church is having their annual Women’s Retreat and a few months ago the person organizing it asked me if I would teach a class at the retreat. When things are months away I find it’s easier to say “yes” and that’s what I did. Now my class is two days away. It’s going to be a class on sketching, I though a painting class would be too complicated for an hour and a half session at the retreat. I have some notes and I have my sketch books that I made on our recent vacation. The purpose of the class will be to get people interested in sketching on a regular basis, whether it be a travel diary, flowers, people, anything. Just sketch. Ha, that can be the slogan for the class. Get it? Instead of “Just Do It”. 🙂

I haven’t had a vegetable garden in ten years and I’ve decided this is the year to start one. Even though it’s only January here in Houston, it’s not too early to start vegetables from seeds indoors. Here are cucumber and zucchini seeds after only 10 days! It’s been fun for everyone to look at the sprouts each morning when they come downstairs to the kitchen, though I’m sure the excitement will wear off. Soon. 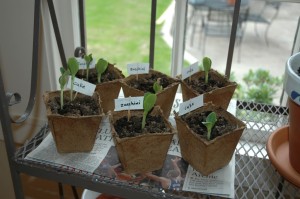 My vegetable garden will go where the old rose garden used to be. The white picket fence is in place and I had some help with the retaining walls for the raised beds. So far gardening is more work than I thought it was going to be, though most of the work has been in setting up the garden, the fun part has been watching the seeds sprout. 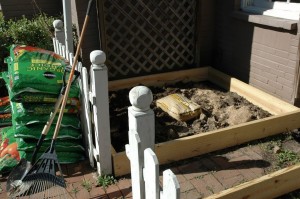