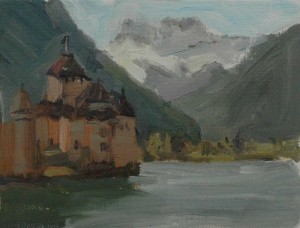 I spent a day travelling to Geneva, Switzerland to visit my daughter who is studying abroad for a semester. I took a 3 hour flight from Houston, then a 7 hour flight to Geneva. It was beautiful as we approached Geneva, the sun was just coming up and I could see lakes with snow capped mountains in the background. I took a quick photo from the plane: 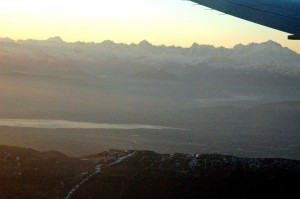 My sweet daughter was waiting for me at the airport at 7:25 a.m.! I got 2-3 hours of sleep on the flight over so we decided to put my bag in a locker at the train station and do some sightseeing. We took the train that runs along Lake Geneva to Montreux, a town an hour away on the far end of the giant lake. We walked along the lake towards a Medieval castle. Spring had just arrived in Switzerland and tulips and all kinds of other flowers were blooming in the gardens along the walkway next to the lake. We sat down for an hour and I painted when we got a good view of the castle. (With nothing else to do) my daughter did a nice little pencil sketch of the castle and we had some hot tea. I brought along my little pochade box which holds a 6″x8″ canvas. After deciding on what to paint and getting set up, I find I can paint this size in about an hour. Though an hour and a half is even better. After I finished the painting we walked another 15 minutes to the castle and then took a tour of the castle. The Castle of Chillon is a 13th Century castle and was built to protect the House of Savoy’s military and commercial interests. It certainly sits in a beautiful location but made me happy to be living in the year 2011 and not in a cold and drafty castle in the 1200’s!