It was finally time to paint cows! I’ve been taking pictures of cows for years. Cows as my family drives along Texas highways to visit grandma, cows as we’re driving along the backroads and ranches of Wyoming, cows in France, cows in the Netherlands. When my kids were smaller they even knew which cows I would refer to as “good cows” and which were the “bad cows”.

There is a list of what makes a cow a “good cow”.

“Good cows” were good, and therefore paintable, if their heads were facing the sun or at least in partial sunlight. Nobody wants to look at a painting of a cow from behind. They needed to be light enough in color that I could see (and paint) the sunlight and shadows on their hides. Light brown, medium brown, or black and white cows were all cause for a photo.

“Bad cows” were the cows that were facing the wrong way. Seems cows like to face towards the sun and away from the wind. So those factors, and where the highway we were on was, all had to be working together to get good photos. It’s like waiting for the planets to align. And this hardly ever happened. (Cows aligning, I’m not sure about planets.)  And black cows are difficult to paint because there isn’t that much variation in value between where the sun hits them and where they are in shadow. Of course it can be done, and done beautifully, but in my early days of taking photos of cows, I avoided black cows for this reason.

All that being said, these cows were painted from a photo of cows that were actually brown and white. I was painting in Holland and was able to get pretty close to a big herd of big dairy cows. I changed them to black and white and I rearranged the patterns on their hides. I needed the black and white pattern to make a strong abstract pattern.  Below is a photo of some of my “reference” cows that I came across in Holland next to a canal a couple of years ago.

This painting was so much fun. I loved using all the different colors in the white part of the hide. I had the idea to make a black and white painting without actually having anything being black or white. So I used lots of ultramarine blues, alizarin crimson, violets, all kinds of colors to get the black and then yellow ochres, greens, and violets (and of course white mixed in with those colors to get the value correct) for the “white” part. Lots of fun, I could paint many more of these and be happy. Below is a close up. Oh, and the pink noses were great to paint to. I enjoyed seeing the noses come to life as I added the pinks and fleshy tones. I know . . . weird! But it’s fun for me. 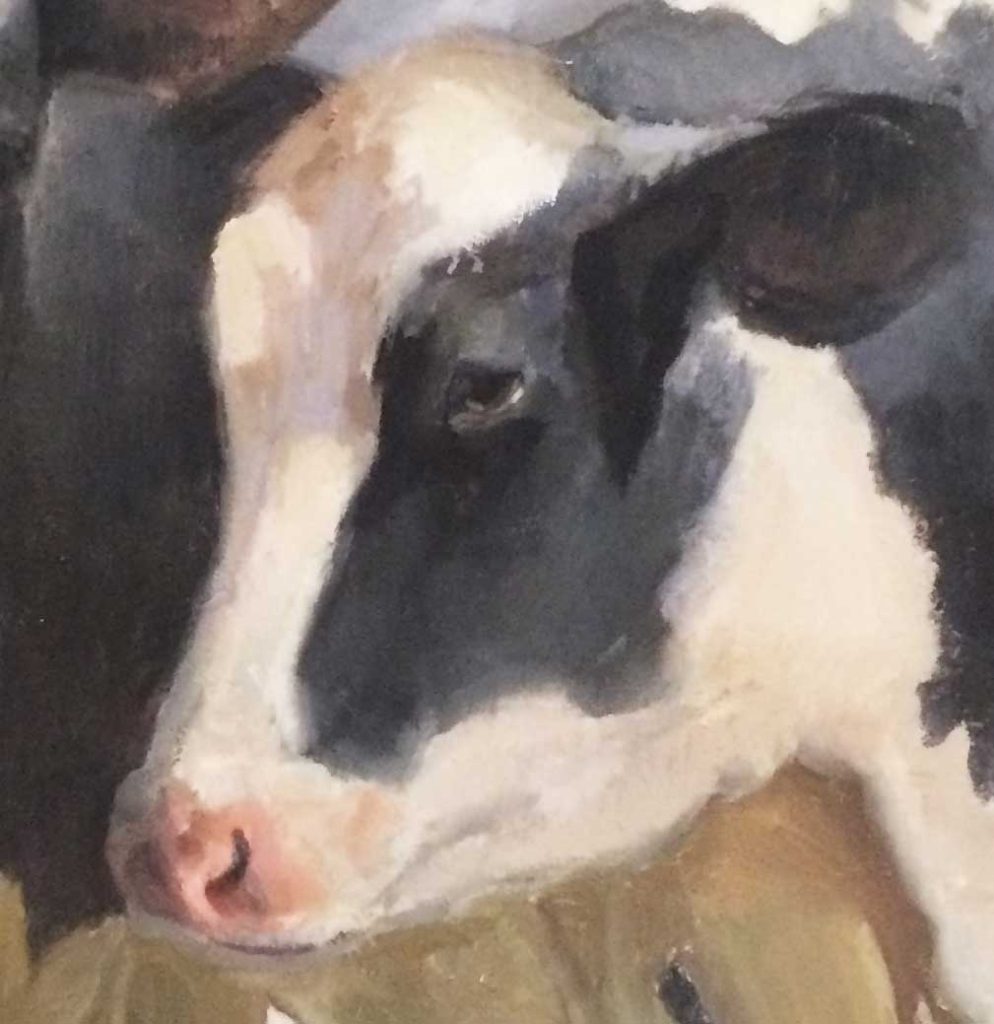