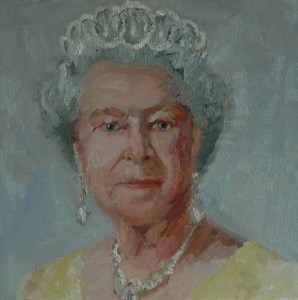 This portrait painting demo was made while I painted Queen Elizabeth II. I have been working on commissions so I thought it would be fun to paint something just for myself. I’ve been thinking about painting Queen Elizabeth II for a while, probably because she is an iconic figure. The finished painting is 10″x10″ oil on canvas. 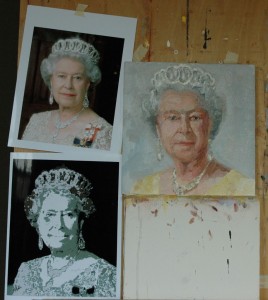 I found a photograph of her Majesty on the web and taped it to my easel next to a blank 10″x10″ board with linen canvas. I also printed out a black and white version, I do this to more easily see where exactly the shadows are. Seeing the image in black and white helps with reading values, there is no color to get in the way of the true value. 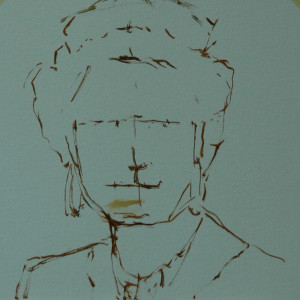 I started with a simple line drawing marking eyes, nose and mouth. I compared the length of her face to the width and the made some marks for the ears, earrings, crown and shoulders. 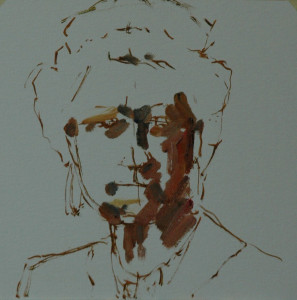 Now come the darks. I always paint the darks first. I lay them down and try not to get back into them when I have lighter paint on my brush later on. This keeps the darks clear and dark. 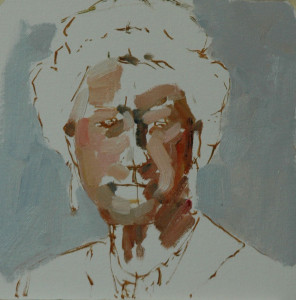 Next I mixed up some flesh color and started laying that in. The head is usually lighter at the top than it is at the bottom because the head is usually lit from above. I kept this in mind and painted her chin darker than her forehead. Also put in a background just to see how I liked that medium blue grey color. 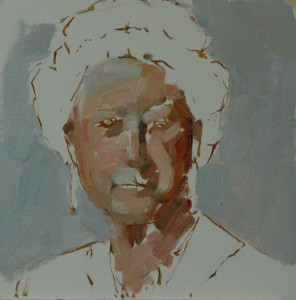 I continued laying in flesh tone using some of the background blue mixed with white for the cooler parts of her face. 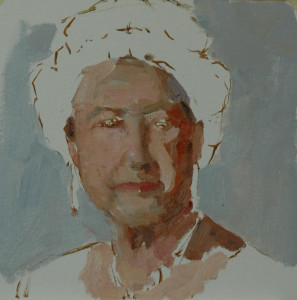 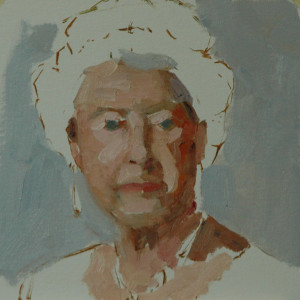 I mixed some lighter pink color for her delicate cheeks and eyelids, and a little patch on her chin. Much better. Put some color in her eyes. And I had to shorten her nose. I have a tendency to draw noses too long and even though I’m aware of this, it still sometimes happens naturally. 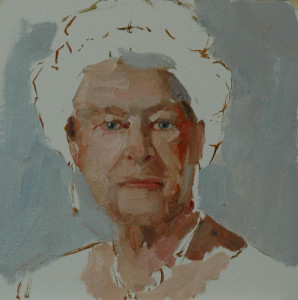 I refined the eyes and painted the area above the eyes, keeping some blue in my mixture for the eyebrow area and between the eyebrows. 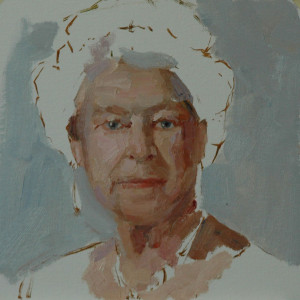 Still working on her eyes. Decided that dark red I had on her left cheek (shadow side) was too red so I painted over it with some green mixed into my red. The green is the compliment so it kills some of the red. 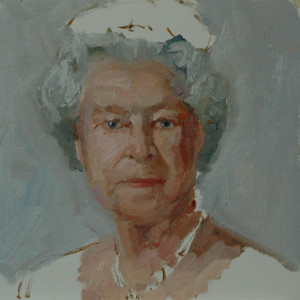 Her mouth was too far to the left so I moved it over to our right just a bit. Painted her hair using ultramarine blue mixed with a little orange and more or less white depending on whether the hair was in light or shadow. Also put a little green in the mix just to have some variety.

Hair is a great place to really push the color and add some variety. Take a look at the blonde hair on this little boy portrait and notice the different values and colors I used.

After that all I had left to paint was the jewelry. And there is a lot of it! It’s gorgeous and fun to paint. Different shades and colors of grey with bright white were used for the diamond highlights.  Light yellow seemed like a good color for the clothing and I made sure some of that yellow was reflected in the jewels. I hope you like it.